It was a successful promotion with over 600 fans attending the home opener.  In addition to earning tickets to the game, customers were able to enter a draw for a timed shopping spree – but you had to be in attendance at the game to win.

After three tries, Holly Chief’s name was drawn and she was at the game!  We hosted the shopping spree on Saturday morning, and being a regular customer at the Food Mart, Holly was able to select groceries to the value of $345 in her 3 minutes shopping spree. Pictured here is Holly (2nd from left) with her 2 children and the Wayway Food Mart staff.  Congratulations Holly! 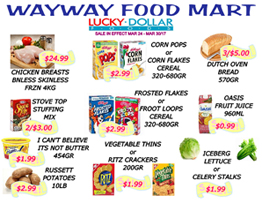 Questions?
Want to make an order?